Have you ever been in a bar and wondered what you should play? A lot of times people end up playing pool but it’s not for everyone. Have you ever wanted to play darts but thought it would be too complicated? Well, don’t worry because here’s your guide to ten different dart games that are easy to pick up and play immediately.

Bored of the Same Dart Games?

Here’s a list of 10 other dart games you can play right now, with a concise description and instructions to get you playing ASAP. For more information and a full guide on each game, click the game name.

Cricket is a common dart game played with two or more players. The goal of Cricket is to be the first player to close all 5 numbers (15-20) and have the highest score. If you accidentally hit other numbers they don’t count.

Each player takes turns throwing three darts per turn. The single, double and triple count for 1,2, and 3 hits respectively.

If a player scores three times on a number, that number is considered closed.

Once a number is closed, additional throws on that number earn points for the player who scored the hit. To win, you must close all 20 numbers and bullseye and have the highest score at the end of the game.

Darts is a lot of fun. If you’ve never played it before, learning to play 301, 501 or 701 can be a little tricky but once you have the rules down, you’ll be good to go. The main issue people tend to have is the subtraction math that has to happen (unless playing on an electric dartboard). However, that is also an appeal to avid darts players as it keeps the mind sharp and adds an extra dimension to the game.

To get started, each player gets three darts. The first player throws three darts at the board and the number on the scoreboard is subtracted from the starting number (301 for 301 darts). The second player does the same thing and you take turns throwing 3 darts until one of the players reaches zero.

The person who reaches zero wins the game! However, in order to get to zero, you have to ‘check out’ or finish on a double. For example, if you have 40 points left you can go for double 20 to check out as 2 x 20 = 40.

It’s really worth giving the ’01 countdown’ games a try as they are much easier to understand if you find someone who knows how to play and play a few games with them. It can seem a lot more complicated when explained in words on a blog post!

Baseball is a great game to play with friends and family members of all ages—even those who aren’t huge sports fans can pick it up easily.

Keep a running total score of each team’s runs per inning and the winner is the team (or player) with the most runs at the end of 9 innings. You can of course play all 20 innings if you like and cover every number on the dartboard – this is my favorite way of playing.

This is a great game for a party or a larger group of people. In this game each part of a number segment i.e. the single, double and triple all count as a hit.

Starting at number one, players take turns throwing 3 darts at the number 1. Once they hit anywhere in the 1 section 3 times, they move on to number 2 and so on. If a player misses with 3 darts, they must continue to try for number 1 on the next turn.

The player to finish numbers 1-20 fastest wins the game. For playing in larger teams you can take turns to play but all play together to attempt to get there faster than your opponents.

FREE PRINTABLE AROUND THE WORLD SCORESHEET

If you don’t like adding then subtracting of the 01 countdown games, you might like gotcha. It’s a great beginner game that still has a lot of the skills required for 01 countdown. For experienced players, it can be a fun alternative game to try.

First, decide on a target score. Above, you can see an example game of Gotcha darts where players Bill and Ted have decided to play to 301. They take turns throwing at the board to score as high as possible. In Gotcha, you don’t have to throw a double to finish but you do have to get the exact score to finish. If you go over you’re bust and have to try again next throw.

As an added twist the ‘gotcha’ part of the game is to be able to ‘kill’ your opponent at any time by throwing their exact score. For example, if Bill has exactly 180 points and Ted strolls up there and throws three triple 20s, Ted has killed Bill, and Ted’s score is now back to zero.

Killer darts game is a really fun one to try with a larger group though you can also play with as few as 3 players.

The aim is to be the last man standing. To begin, each player throws one dart at the board and the number they hit will be their designated number for that player for the entire game.

From the illustration above you can see that Mike’s designated number is 19. When people want to ‘kill’ Mike, they aim for 19. Each time they are successful, Mike loses a life. Singles count for one, doubles for 2, and triples for 3. Each player has 6 lives. Enjoy.

This is a really simple fun game to play with new and old players alike. Players work their way around all the different numbers in succession starting with the number 1.

When targeting each number a player has the opportunity to win the game outright by achieving a ‘Shanghai’. A Shanghai is when a player hits a single, double and triple in one turn.

Otherwise, the game continues as a running score game, and if you do get to 20 without either player achieving shanghai the player with the most points wins.

An excellent training game as each turn puts you under the pressure of a winning shot and you also get the experience of all the numbers around the board and all the segments – single, double, and triple.

A fun game of jeopardy where at any time during the game you will have to halve your score if you don’t hit the number for that round.

Firstly, each player gets to throw their highest score with 3 darts and this is what their score is to start. Then begin with number 1. Each player must use all three darts to score on the number 1 segment.

If they miss the number one segment with each of their three darts, their current running score is halved. Ouch.

Once you’ve played through all the numbers in sequence from 1-20 the player with the highest score wins.

Possibly the easiest dart game to understand high score darts can be a good introduction to the game for new players. First, decide on a high score number to win e.g. 1000. The winner is the first player to accumulate this score.

You don’t have to finish on a double or even the exact number. Just get as high a score as possible as fast as possible. An important skill to be good at in darts!

Another super simple game to finish up with. Essentially Bully is just a game to see who is best at throwing a bullseye. This was probably the type of game that was first played on dartboards as players competed to see who was the better shot at hitting the center of the target.

Each player can have 3 darts per round. The closest of all 6 darts (2 players – 3 darts per player) wins that round. Agree on how many rounds e.g. best of 5 and play!

If you have a tonne of people this can be a really fin part game. Each player gets one dart and takes a turn to hit the bull. Leave all darts on the board till the end and the dart that is closest wins! Or gets many drinks bought for them – you decide. Bully is a super fun darts game for parties or drinking games. Think Men vs Women or equivalent for a fun team version.

No scoresheet is required for Bully!

Hopefully, these easy dart game instructions will give you enough of a gist to start playing quickly. Are there any here you haven’t played before? Give them a try – some games can sound pretty dull on paper but in fact, be lots of fun in practice. 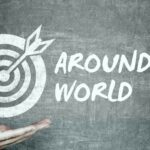 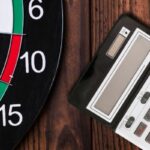