How To Play 301 Darts Game: Rules, Scoring, Tips and Tricks

One of the best things about darts is the versatility it offers in terms of game variety. 301 delivers a perfect balance of challenge and simplicity.

It’s the ultimate party game for newcomers, who will enjoy its straightforward rules with an easy scoring system that anyone can play; while experienced players relish trying out new strategies to see how quickly they can finish.

If you are up for doing some math, let us talk you through 301. This guide will explain the scoring and rules of the game.

The objective of 301 is simple – be the first player to get to zero points exactly by finishing on a double (the bullseye also counts as a double). If you score higher than the points needed to finish, your points reset to the number you started with on that turn.

Each time a player has a turn they add up their score from 3 darts and subtract it from the 301 total.

The following three zones are the basis of the scoring system:

Get our free printable scoresheet for 301.

Before you can earn points on the scoreboard, you must throw a double.

In tournaments, each game is called a ‘leg’ and you can play three legs at tournaments – best of three, or in other words, the first player to win two games. In subsequent games, the player who did not win gets to go first.

You may also be interested in this article on how to play cricket.

How to Score in 301 Darts Game

The scoring system for 301, is simple and straightforward. Begin by listing each player’s name on the sheet. Separated by a straight line. Then another line to divide the score per round by the running score.

Space will be divided into two sections by each player. The outside will show the player’s score for the turn.

The inside will show the running total. In the example pictured,

When deciding on which double to start with, it is important to choose a number you can hit consistently. It doesn’t matter what number it is. The only thing that matters is how fast you can get into the game.

When trying to close out on a double, aim slightly outside – to minimize busting, you are better to score zero than perhaps hit an odd number that means you need a minimum of 2 more darts to finish out. 1 dart to make the number you have left even again, and one dart for the double.

When thinking of how to finish out, you can attempt to manipulate which double you are left with to finish the game. For eg. many players will try and be left with 40 so they can hit ‘double top’ or double 20, to close out the game. If they miss and hit a single 20, you can then go for double 10 to close out.

301 darts has been standard for darts for many years. Although darts have evolved to 501 and even 701, 301 still serves players who enjoy faster games and of course beginners. Like anything in life, the best way to improve at 301 darts is to practice.

To get started if you are a complete beginner, you can start by playing “straight in” instead of “double in.” If it’s someone’s first time you can ignore the ‘double-in” start and make it much easier to get things going.

Double starting does make the game more challenging, so if you are looking to improve your darts game, spend time practicing how to play 301 darts with double-in/double-out rules. We hope you love this game as much as we do! 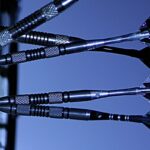 How to Win at Darts: Tips From Experts 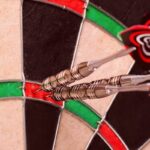