Darts Cricket Strategy | How Do You Play Cricket in Darts

Cricket is one of the most popular bar dart games around America. The principles are easy, fun and it provides novice darts players a chance to play with more experienced players.

The object is to ‘closeout’ numbers 15 through 20 and the bull’s eye by hitting them three times before your opponent. After a number is closed out you may then score points every time it’s hit while your opponent is still attempting to close it.

The winner is the team with the most points when all numbers have been closed by both teams.

You can play in teams of 1 or 2 players. Each team takes turns throwing three darts.

After a player throws three darts, they tally up any hits for that round on the scoreboard and gather the darts in the dartboard.

If teams have more than one player, they’ll alternate their team turns to throw. This proceeds until numbers 15-20 and the bullseye is shut out. After both groups shut everything out, the group with the most points wins.

Check out how to play scram darts next – it’s a simpler version of cricket.

Each player gets three darts to throw during their turn. The objective is to closeout the numbers 15 through 20 in addition to the bullseye. If the player hits any other number outside of 15 and 20, these don’t count.

For example, if your team shut out 15 but the other team has not, then it’s possible for YOUR team to earn points. The players may hit 15 as many times as likely to accumulate as many points as possible. However, after the other team shuts 15 out, no further points can no longer be granted. Your staff must also have shut out the amount first before you can begin scoring points on this number.

Scoring is simple – a three-column layout is used with the dartboard numbers 15-20 and the bullseye.

None of the other numbers on the board count in this game and should be considered a miss.

Singles count as one hit and must be marked with one slash (/).

Three strikes (O around the X).

Once one team closes out a number, every subsequent hit provides that team points and these are marked on the outside of your scoreboard and kept as a running tally. In the example below, the team has closed out the 20 and hit 2 x 20 when they threw. 2 x 20 = 40.

The outer bullseye counts as 25, and the internal bullseye 50.

Numbers do not have to be closed out in any particular order – eg. I can take out the 19’s first if I’m particularly skilled at the shot. HItting treble 19 in darts is a skill to be admired and many aspiring darts players try to get this one down. You could even start with the bullseye if you wish! But to be honest, the chase for the bullseye is what makes this game exciting in the final stages.

Try to close out the higher numbers first – in particular 20. Players like throwing at 20 and if you can close it out quickly, it puts pressure on the other team to switch to the next highest number (19) or keep trying to close out the 20. Darts players usually have certain strengths so it’s good to know these in advance.

For example, if you are playing against someone who loves to throw treble 19, then get in there quick and closeout 19!

An excellent starting place is to attempt and shut 20’s because they will give you the most points once shut out if your competitor hasn’t closed them. If you can close out your 20’s early, it’s a terrific way to rack up some points early in the game.

This will also prevent them from getting 20’s on you and remember once both teams close out a number, neither team can score points with that number.

If your opponent hits a number twice and you’ve yet to hit it once, it can be a great idea to turn your attention to that number. Cricket is all about having a good balance of offense and defense.

For beginners, a cool strategy is to go for the bullseyes from the beginning. Bullseyes are tough for any player. If you are aiming for the middle of the board there’s a really good chance that you’ll hit something and your throws will count. Easier said than done sometimes for absolute beginners.

Not only does this allow you to have a lucky start, but misses can hit the different numbers that just so happen to be needed! As soon as you get a lucky strike or two on other numbers, switch your attention there.

The best way to learn strategy in these games is to play them and figure it out. Watch what the more experienced players are doing and ask questions.

A simplified version of cricket darts can also be played without points. The first team wins the match to close out all numbers and the bull’s eye. This version is faster since it doesn’t require both teams to shut out all numbers and bullseyes, and also, it simplifies the game’s strategy.

When you simplify the game, you can use as many numbers as you like – it’s also great practice as you work your way around the board.

Another alternative that you can play is that for each number you must hit 1x single, 1x double and 1x triple of each number. This is of course much harder but a good game if you are really enjoying your darts.

Check out our article on how to play 301 darts.

What is English Cricket Darts?

Another variant of cricket darts, which is mainly played in UK pubs. This cricket darts game is actually based on the traditional English Cricket game. Each of the numbers is used, however, because you need to score at least 40, the higher numbers are the favorites.

One team is regarded as the batter while another is the bowler. The batter has to go first. On the dartboard, ten stripes are marked. These stripes are called wickets.

The bowling team has to eliminate those wickets by hitting the bullseye.

The batting team must score as many points as possible while the wickets stay on the board. However, only scores above 40 are counted. For example, if their turn ends with just 18 points, then no points are gained.

Any points that you earn past 40 are the real points. For example, if you score 60 points, then your true point score is 20. The 40 does not count. . It is easy to calculate your total points in turn by subtracting the points you earned from 40. So, in case you scored 60, then remove 60 from 40 to receive 20 points. 20 points get recorded on your score sheet.

You can decide how many innings (turns) you want to play. At the end of the game At this time, both players calculate whoever earned the most points is the winner.

Whether you play with English Cricket Darts or even the more common Cricket Dart game, these games are terrific for helping you improve your darts game.

The cricket darts game is a really fun way for beginners to start playing darts – especially without all the complicated math that’s involved in many other darts games – 301, 501 etc. It brings people together and is a game where beginners can happily play along with more experienced players. As such it continues to be hugely popular in the USA. 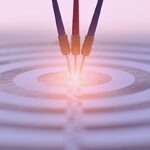 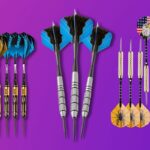