How to Play Darts – A Beginner’s Guide

In this all-inclusive beginners guide to playing darts, we’ll cover everything from the layout of the dartboard to the construction of the dart itself. Perfect for the complete beginner, we’ll explain how to stand and throw, and with an introduction to some basic games and a bit of darts etiquette, you’ll be ready to take on the darts world in no time.

The Layout of the Board

Why Are the Numbers Not in Order?

As you can see the numbers around the outside of the board are not in sequence, and there is a method to this madness.

The game of darts is based on skill and not luck. If the numbers 18, 19, and 20 were all placed together, you would only need a very general aim to get a high score or make a lucky shot.

You will notice that on either side of every high number there are two low numbered segments, which can be very annoying for a beginner, but as your skill increases you will feel the satisfaction when your dart hits the triple twenty or you get a bullseye (the small red dot in the center worth 50 points).

What Do the Concentric Circles On a Dartboard Mean?

As you can see, there are 2 concentric circles on the board, one around the outside and one half to the midpoint. If you land a dart in one of these circles, they multiply the score of the segment they are in.

The outer circle multiplies by 2 and is termed a double, and the inner one multiplies by 3 and is called a triple. So if you are lucky or skilled enough, and your dart hits the triple 20, your score will be 60.

How Do I Get a Bullseye?

The bullseye is the small red dot in the center, and it is worth 50 points. There is a second circle around the bullseye, and this is worth 25 points. This is also sometimes known as the outer bull.

There is a lot of talk about “getting a bullseye,” and generally you will hear a big cheer go up when someone hits the bull. However, it is not the highest score you can get with a single dart, that honor goes to the triple 20, and you will see at the beginning of a professional match it is the triple 20 the players aim for rather than the bullseye.

This is because it is the maximum points you can achieve with a single dart.

What are the Different Parts of the Dart Called?

Which Darts to Choose?

There are several different types of dart to choose from. If you have just bought a dartboard set to try your hand at home, the darts supplied will probably have a metal or plastic point and fixed plastic flights. These are fine for beginners to practice with and get a feel for throwing but are not renowned for their material’s quality or accuracy and consistency.

As you progress, you will want to experiment with different weight darts. There is no need to go out and buy top-of-the-range darts straight away; buying 3 cheap sets in different weights and seeing which you prefer before investing in a good set is better.

The top sets go for over $200 so trying as many as possible before you invest significant cash in your equipment is always a good idea.

Where and How to Stand when Playing Darts

The line on the floor in front of the dartboard is called “the oche,” or the throw line and it is the point you should stand behind when throwing your darts. Your feet should not touch when throwing.

In professional darts, they will use a raised oche so that players can put their foot on it and have to step up to go and collect their darts.

If you are setting up a dartboard at home, the official distance is 7 feet, 9 inches, or 236cm. The dartboard’s height should be 5 feet 8 inches or 173cm from the floor to the bullseye.

How Should I Stand?

There are various throwing stances, and you should practice different ways to stand until you find the best way for you. Remember to keep your feet behind the oche at all times or you could forfeit your score.

Firstly you should line yourself up roughly with the center of the board.

It is most common to stand with your throwing side further forward (although a few top players stand square to the board). If you are right-handed, your right foot is slightly in front of your left, and the other way if you’re left-handed.

Your feet should be slightly apart and your weight more on your front foot, whilst keeping a firm stable stance.

Most people find it comfortable standing at approximately 45 degrees to the oche, but again play with different angles and find which is comfortable for you.

If you are a bystander, you should always stand behind the throw line as darts can go wide or bounce back out of the board if they hit a wire. Pay particular attention to young children and pets who may stray in front of your throwing zone.

How Do I Hold the Dart?

Once you are comfortably positioned behind the oche, it is time to throw the darts. Take one dart in your dominant hand, and hold it point first in a similar way to holding a pencil.

Keep your eye on your target, which should be the bullseye in the center at this stage because it makes improving your aim easier.

Keep the tip of the dart pointed in the direction of the board at all times.

With a fluid movement bring the dart up to around the point of your ear, and throw it point forward, towards the bullseye.

What if I Miss?

Remember at this time you are just practicing, and every failure is an opportunity for learning. Many people miss the board entirely on their first shot.

If your shots consistently go to the left, adjust your throw, so you are aiming a little more to the right. If the darts keep falling out of the board, throw a little harder, and so on.

In these games, players start with a score of either 301, 501, or 701, and subtract their total throwing scores from the initial score. The aim of the game is to be the first player to zero.

The tricky part is that the final throw must end on a double. If the player has a score of 10 left in order to finish, he must hit double 5 to finish.

If his or her dart goes wide and hits the single 5 zone, he has a choice of finishing with the next dart in 1 and the final as double 2 or throwing his turn by busting with a high number so he can stay on the double 5 for his next turn.

Many games finish with both sides trying to score double 1 because the scoring can go no lower than 2.

Here is a link to the PDC’s (Professional Darts Corporation rules) professional rule book for more in-depth information on the rules.

Round the Clock or Round the World

In this game the aim is to hit each segment of the board in numerical order, starting with the number 1 and finishing with a 20. The double and triple zones count as a single in this game.

Each player continues with his turn until he misses his desired target number.

Sometimes, you can finish with a bullseye to add a bit of spice.

The aim of the game is to spell out KILLER by earning a letter every time you hit your number (with your good hand!).

If you want to be mean, for an extended game, once you have reached Killer status, you can remove letters from your opponents by hitting their numbers.

You will notice professional players shake hands at the beginning and end of the game, not only with each other but with the scorer too. It is a sign of agreement that the game will be and has been played fairly and by the rules.

Do Not Distract your Opponent

As with all games of skill, it is a poor show if you have to resort to distraction tactics to win!

Allow your opponent some room, and stand behind their line of sight. Swearing is frowned upon and should be avoided.

This should always be done by you and after the score has been written down. That way there can be no disagreement over the final score.

Stepping Over the Line

This is known as a fault. However, it is bad etiquette to call a fault until after the person has thrown. On the other hand, if they are a repeat offender, it is acceptable to interrupt their throw to call attention to it.

The Scorer (Or Chalker)

The Chalker should always be shown respect, even if you believe they are wrong. If you are following the rule of leaving the darts on the board until the score is written down and calculated there should never be a problem.

Pay Attention to the Game

As with any game, nothing is worse than trying to keep other players on track. If you’re going to play, play. If not, step aside.

Darts can be a really fun family game, but remember you are playing with sharp, pointy projectiles, so if younger children are involved, maybe start with a velcro dart set!
Have fun. 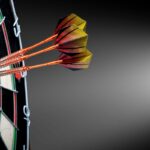 How to Light a Dartboard