The Darts Bullseye – Everything You Need to Know

The bullseye in darts is the small, innermost circle on the dartboard. It is worth 50 points. The green circular area surrounding the bullseye is known as the outer bull and is worth 25 points.

In soft tip darts, the entire center circular area is classed as the bullseye and worth 50 points.

It’s called a bullseye because it is believed early archers in England would use the skull of a bull and attempt to shoot through the eye of the bull as target practice.

How Many Points Is A Bullseye?

Is the Bullseye a Double?

Yes, the center red area of the bull is counted as a double in ’01’ countdown games and can be used to check out or finish a game. If you have 50 points left you can hit the center bull and win the game.

However, the outer green area of the bull is classed as a single and cannot be used to check out.

The bullseye in soft tip darts is quite different from steel tip darts. Primarily because the entire area of the center circle is classed as a bullseye and worth 50 points. As this are is in fact larger than the triple 20 section, some soft tip dart players may opt to aim for the bull instead of triple 20 as:

Should I Aim For the Bullseye?

In steel tip darts the chances of hitting the bullseye are slim and should probably only be used if you are behind in a match and have nothing to lose – if you have the opportunity to check out on 50 then take it.

Otherwise, it’s likely not a good idea to use the bullseye.

However, as explained above, many soft tip players use the bullseye more often as the entire area counts as a double bull worth 50 points.

For more information on the tactics of hitting the bullseye check out this article –Why Don’t Dart Players Go For Bullseye?

What is the Most Difficult Checkout in Darts?

When playing 501 the most difficult way to achieve the perfect game and a 9 dart finish is to score the following:

Using the Bullseye to Start a Game

In darts games like 501 the order of play is vital. If you get to go first, you get a chance at everything first and that includes finishing. For that reason when starting a game, the bullseye is used as a target to decide who goes first.

One dart from each player is thrown at the bull and the player closest gets to go first.

Tips on Hitting the Bullseye

The following are some tips to help you hit the bullseye more often:

Those of you who have been around long enough (and in the UK) may remember the TV show ‘Bullseye‘ that was actually a quiz show with darts as the theme. In the 1980s darts was extremely popular in the UK and at their peak attracted 20 million viewers!

You can check out an episode here (though be warned as it hasn’t aged particularly well!):

The bull is an important part of any dartboard. Although it may not often be used in competitive darts, it adds an element of extremely high skill to the game making it an exciting thrill for audiences if a player succeeds with a bullseye.

So there you have it – everything you need to know about the darts bullseye! Whether you’re a beginner or an experienced player, understanding the bullseye is crucial if you want to be successful. Practice makes perfect, so make sure you get plenty of time in at the dartboard and soon you’ll be nailing that bullseye every time. 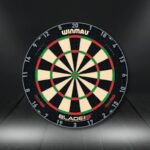 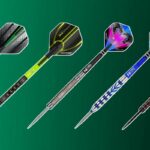