What is a Good Average for Darts?

When it comes to how good you are at darts, the most important thing is to beat your opponent. However, everyone has bad days and one way to assess your skill level and consistency over time is to track your averages.

A good dart average for beginner players is between 30 and 40. Average players will rank anywhere between 40 and 60 points. Pub and club league players will raise the bar to 60 and 80 points. Then there are pro players – who compete at professional and international levels – whose average is above 80 and can even go up to 100+ points.

In this post, we detail everything there is to know about dart averages, from how you can calculate them and whether keeping track of your dart average is worth it.

What Does Dart Average Mean?

As the name suggests, a dart average is the average points a player consistently achieves in a dart throw.

The higher the dart average, the higher the points scored per dart throw. Averages may differ depending on league preference and the country you reside in.

Dart averages aren’t important for beginners. They are used to measure the accuracy and consistency of a player’s performance. You can have an average of 40 and the next day, you choke and sink down to 20 and it can be really discouraging.

However, for intermediates and league players, you can use your averages to track your improving skills as your darts journey continues.

How Do You Calculate Dart Average?

One-Dart Average is the number of points you score after one game of 501 or 301. PPD is calculated using the formula:

The highest achievable PPD is 60 by hitting the treble 20. The lowest is 0 for failing to hit the board and 1 for hitting the single 1.

The PPR is considered more accurate since it calculates the average of three dart throws. It also considers any issues you may incur with your scoring technique. For this reason, it is the preferred method used by the Professional Darts Corporation (PDC). PPR is calculated using the formula:

The highest achievable PPR is 180 by hitting the treble 20 three times. Like PPD, the lowest are 0 and 1 for missing the board and hitting a single 1 in each round, respectively.

What is MPR in Darts?

There is a lesser-known dart average known as Marks Per Round (MPR). Points in MPR range from 0 to 9, where 9 is the highest. Marks are calculated based on the sections where a dart will land, regardless of the number. For instance, both treble 1 and treble 20 will count as 3 marks.

Here are the marks for each board section:

The formula for calculating MPR is:

The highest MPR is 9, which you can achieve by consistently hitting trebles. Like PPD and PPR, the lowest MPR is 0, which occurs when the dart misses the board, and 1, when a dart hits a single.
Calculating your average can prove to be tricky. If math isn’t your specialty, you can use our darts average calculator for faster and more accurate results.

What Is a Good Dart Average for Beginners?

When you are starting out, you are more likely to register the lowest scores, which is totally fine. If anything, you should focus on having the lowest number of darts in ’01 games. Beginners usually average between 30 and 40 points.

As a beginner, you need not worry so much about your average but instead, focus on your form and consistency. Be on the lookout for ways to improve your technique instead of obsessing over the numbers.

What is a Good Average for Bar League Players?

Your local league is for having a nice time and getting some friendly competition, and socializing with friends. You get used to playing with other people and learn the different techniques and etiquette of the game.

Pub and club league players average 60 points, with top players reaching 80. Darts can be stressful when playing with more people around. It’s, therefore, normal for your average to be a bit lower compared to playing solo at home.

Leagues divide players into divisions or groups, typically three to four. Some bars also have youth leagues. The averages are different in each division, with the top ones being the toughest.

What is a Good Average for Pro Players?

Pro players are among the small percentage who will consistently average above 80. These are players who are eligible for tournaments such as the American Darts Organization (ADO), British Darts Organization (BDO) and Professional Darts Corporation (PDC), among others.

In 2019, Peter Wright achieved the highest average at 123.50, but the score wasn’t officially recognized as a record as the game wasn’t televised but only streamed online – we can predict that rule may have to change soon!

As of July 2022, the world record for the highest televised average stands at 123.40, set by Michael Van Gerwen during the 2016 Premier League.

Phil Taylor enjoys the award for the best career average at 101.28. This means that Mr. Taylor averaged 100+ in all his career games. Impressive, right?

Ways to Work out Dart Averages

If you are playing soft tip darts, your dartboard should keep track of your averages for you.

If using a bristle board you can try using our darts averages calculator or, alternatively, an app like ‘Score Darts Scorer’ that’s available on Android or IOS.

There are a few affordable options if you’d prefer an actual darts scorer that you can mount next to your dartboard.

As well as tracking your averages, they can be the perfect tool if your subtraction skills are not where you’d like them to be…and yes, it makes life a LOT easier.

These tools are perfect for the casual player, but be warned, if you are serious about getting better at darts and getting involved in league matches with steel tip darts, it is much better in the long run to do the scoring yourself.

Although it’s tricky at first, before long, it’ll become second nature, and you’ll have no problems stepping up to score a match yourself.

As a beginner, don’t get hung up about getting a high average – it’s much more productive to focus on enjoying the game and the competition.

However, If you’re serious about darts, keeping track of your average is a great way to objectively measure your improvement. If you’ve been playing darts for a while, then you’ll know how challenging it is to be consistent but that it is so vital to your performance in darts.

Keep practicing, and those higher averages will come! 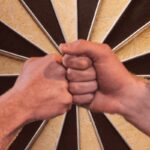 Darts Etiquette – You Need to Know These! 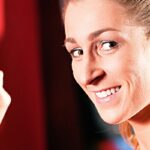