17 million Americans play darts, but most people won’t know where or how darts began.
You might think that it all started in a pub in England, but the history of darts is much more interesting than that.

There’s evidence that darts date back thousands of years and that modern darts were invented by a man that never existed.

Keep reading, and we’ll tell you all about this mysterious man, how darts first came about when it was finally recognized as a sport, and a whole lot more.

No one is completely sure who invented darts. Some people say it was Brian Gamlin, while others credit Thomas William Buckle for inventing it.

So, what do we know about these two men?

Brian Gamlin was a carpenter from Lancashire. He came up with the darts concept and created the number sequence on dartboards, according to multiple sources. He is believed to have passed away before he could patent his idea.

But some say that Gamlin never existed. Patrick Chaplin states that there is no record of his death and suggests that he was an imaginary figure.

If that’s the case, then Thomas (sometimes referred to as Tomas) William Buckle is the man that can be credited with inventing darts. Buckle is described as having been a wire-maker who made the Yorkshire dartboard and came up with the number system.

However, if you want to look deeper into the history of darts, we know that a form of darts was played in the Middle Ages. Back then, the game was called ‘dartes’. Arrowheads, cut-down arrows, and miniature spears were thrown. Instead of a dartboard, targets or tree trunks were used.

What Country Does Darts Originate From?

Darts originated in England, and it’s still the top-ranking country for the game in the world. Other countries where darts is popular include the Netherlands, Wales, Scotland, and Belgium.

Today, most countries play the English version of darts, including most U.S.-based players.

When was Darts Invented?

The answer to this question depends on who you believe invented darts. Brian Gamblin is often credited with coming up with the idea for darts in 1896.

If you think that Thomas William Buckle was the man that created darts, then it was around 1912 when he did so.

1314 was when the word ‘darte’ was first introduced, according to Harrows Darts, so you could say that that was when darts were first invented.

Why were Darts Invented?

It’s safe to assume that darts (or dartes) were invented out of boredom. Soldiers had lots of downtime between battles and so started throwing arrows at beer barrels. They then moved onto tree trunks and used the natural rings in wood as targets.

Who Invented the Dartboard?

There doesn’t appear to be any question about who invented the dartboard. Thomas William Buckle has this honor and is thought to have created the very first dartboard in the cellar of his home.

What Were Original Dartboards Made Of?

Original dartboards were made from elm or poplar wood. These woods are soft, so it was a simple process to turn them into their desired shape.

Since then, modern dartboards have had a makeover and are usually made from sisal fibers that have been applied to a backing board.

When Did Darts Become Popular?

Darts became popular in England in the 1920s and 1930s when the first official championship took place. It was an affordable and accessible hobby during this period which people loved to play with a drink.

During World War II, the Americans started to get a feel for the game, presumably for the same reasons, and they haven’t looked back since.

When Did Darts Become a Sport?

Surprisingly, darts was only recognized as a sport in March 2005 in England. However, many people had called for darts to be officially named a sport for decades.

Since then, darts has become a sport in the following countries:

How Did Darts Become a Popular Pub Game?

When you think of darts, it’s hard not to automatically think of the pub. It is thought that soldiers first introduced darts to the pub after moving the game from outdoors to an indoor setting.

Throughout the entire 1900s, darts was mostly played in pubs. Most pubs had a dartboard, so it’s easy to see how punters were enticed to try their luck at the game.

It was even in pubs where rules for the game started to be created. For example, The Hockey and Sons get the credit for setting a standard throwing distance which was measured out with beer crates.

When was Darts First Shown on TV?

The very first time a game of darts was shown on television was on Saturday, May 29, 1937. The broadcast was called Darts and Shove Ha-penny and was shown on the BBC.

There was the occasional darts game shown on TV after this, but it wasn’t until 1972 when the News of the World Individual Darts Championship was broadcast, that darts matches made a regular appearance on the box.

The history of darts is a long and somewhat complicated one. We’ll never be entirely sure who created it and when. But we do know that it’s a much-loved game with a lot of interesting history behind it.

Next, check out Will Darts Ever Be an Olympic Sport? 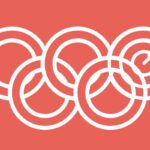 Is There a Treatment For Dartitis? 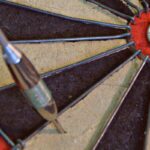