Soccer darts inflatables are giant dartboards. But you don’t throw darts at these boards. Instead, they’re designed to be used with soccer balls.

The game is simple, fun, and entertaining, and we’ve never known anyone that’s played it not to love it.

There is a range of soccer darts inflatables that you can buy. So, we’ve gone through them and reviewed them to see which ones are the best. Read on, to find out which board we rate the most. 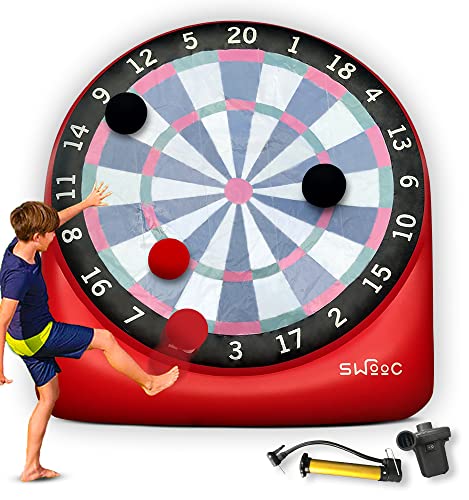 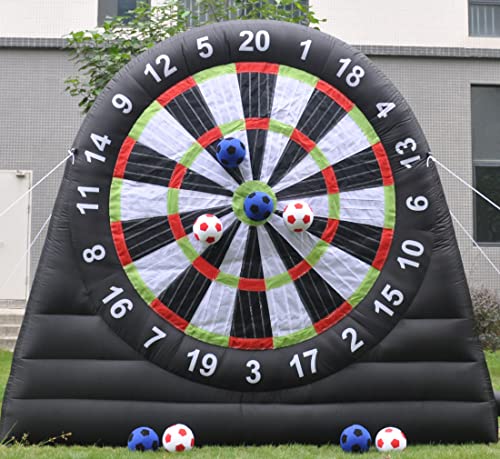 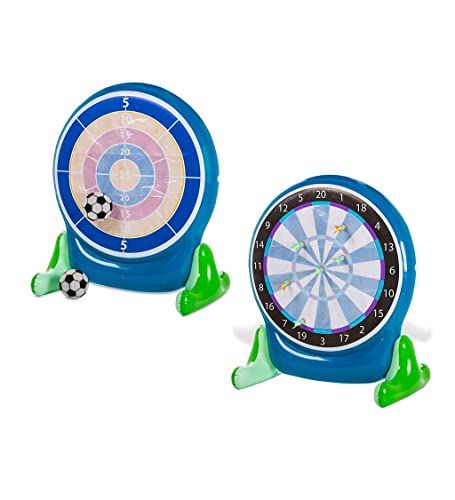 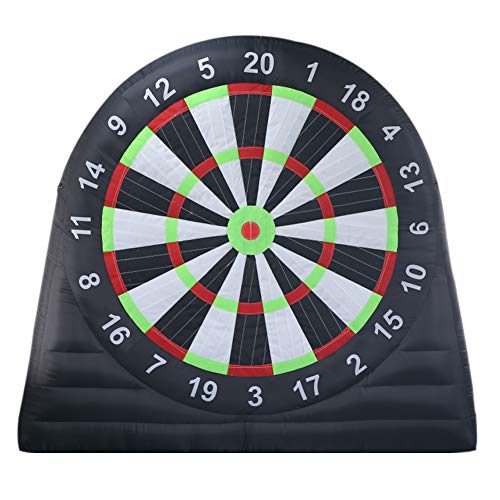 What Are Soccer Darts Inflatables?

Soccer darts inflatables are usually made from vinyl. Some of them need to be pumped up with an air pump; others are kept inflated with an air blower.

They have a sticky dartboard on the front of them, which the soccer balls stick to. You also need to stake them into the ground and weigh them down to keep them secure.

How Do Inflatable Soccer Darts Work?

Inflatable soccer darts is one of the easiest games you can play. All players have to do is aim the soccer ball at the desired number on the board to score.

You can play traditional darts games, such as 501 and 301 on an inflatable soccer darts board. Or, you could see who gets the highest score after a set number of kicks.

When Would You Play Soccer Darts Inflatable?

You can play soccer darts inflatables at any time. We think it’s a good game for kids’ birthday parties, garden parties, festivals, and fundraisers. Some people may prefer to hire an inflatable soccer darts set to start with. But we’re sure you’ll have so much fun with it that you’ll want to buy your very own.

How Big are Soccer Darts Inflatables?

Soccer darts inflatables come in a range of sizes. The smallest we’ve seen was 4.8 ft while the largest was 16.4 ft.

Now you know what soccer darts inflatables are, read on to see which ones are worth spending your money on.

SWOOC’s Giant Kick Darts is a great all-round soccer darts inflatable. Coming in at more than 6 feet tall, it’s ideal for garden gatherings and parties. It’s not just standard soccer darts you can play on this board, either. There are 16 games in total, including baseball, kick tac toe, and half court.

We’re impressed with how many accessories you get in this set – 4 balls in total, 2 pumps, ground stakes, and a scorecard and pen. If you’ve got impatient kids (or big kids!), you’ll be pleased to hear that it took less than 10 minutes to inflate the board and fully set it up.

If all that wasn’t enough, SWOOC plants a tree every time one of these soccer inflatables is ordered. By buying this fun game, you’re also benefiting the environment and helping families escape poverty.

We were amazed at just how big the V-infla Giant Outdoor inflatable Soccer Darts Board was. At 10 ft tall, it certainly makes a great talking point, as well as an entertaining game. Despite its size, it blows up in just 2 minutes.

There’s no need to worry about it blowing away as it comes with nails and ropes to secure it into the ground. You also get some sandbags that you can fill and use to weigh it down if you feel you need a little extra security on a windy day.

This inflatable soccer darts board also comes with 8 footballs. The board is made from sticky velcro and the balls stick well to it. We feel that this board is suited to large parties, corporate events, school fun days, and similar, due to its size and durability.

The HearthSong Giant Inflatable 2-in-1 Darts and Soccer Set is the smallest option on our list of soccer darts inflatables. But, at just under 5 feet tall, it’s still an impressive size and is ideal for most back gardens.

What we really like about this darts and soccer set is the double-sided board which lets you choose between a game of soccer or a game of darts. There are 2 soccer balls and 6 darts included in this set. To secure this board, you can fill the base up with water. You also get ground stakes.

One thing we were disappointed about is that there’s no pump included. If you’ve got an existing pump at home, great, but if not you’ll need to factor the cost of one into your purchase.

If you’re looking for a giant inflatable soccer darts set, look no further than the SAYOK Outdoor Inflatable Soccer Darts Board. It comes in a choice of three huge sizes; 10 ft, 13.12 ft, or 16.4 ft.

As this board is so big, it comes with an air blower rather than an air pump, so make sure you’ve got a power outlet near to where you want to play it. You also get 8 balls, stakes, sandbags, ropes, and repair patches in the set.

We think this inflatable soccer darts set is a great choice if you regularly hold parties and get-togethers. Otherwise, it’s pretty expensive and large if you only plan on the odd game in your back garden with your kids.

Who doesn’t want to enjoy two great games together? Soccer darts inflatables let you do just that. Whether you want a standard inflatable board for your garden or an extra large board for big events and parties, these inflatable soccer darts sets have got you covered.

Next, check our guide on how to hang a dartboard outside. 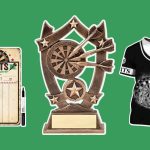 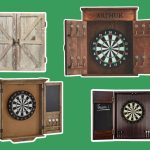 There are so many good rustic dartboard cabinets online that you may find it a little tricky to choose the best one. Worry not, as we’ve done the shopping around for you.

We’ve rounded up some of the best darts paraphernalia available to help you choose the perfect piece.

How Much Does a Dartboard Cost – With Examples

We’ve researched how much various types of dartboards cost so that you can choose the one that’s right for you.