How to Play Mickey Mouse Darts

In a game of darts, accuracy is key – but so is a bit of showmanship. That’s why we love Mickey Mouse darts, a visually stunning game that’s perfect for both beginners and experts alike. If you’re looking to add a touch of whimsy to your next dart match, read on for our guide to playing Mickey Mouse darts. Here is everything you need to know about it, including Mickey Mouse rules.

What Is Mickey Mouse Darts?

Mickey Mouse Darts (also known as Crickets) is a popular dart game similar to cricket, but with different variations to increase or reduce its difficulty. Players must take turns ‘closing off’ numbers from 20 to 12 on the dartboard. This is done using any triples (trebles), doubles, or bullseye.

To close off, the player’s darts must land on the number three times, not necessarily in the same round. Traditionally, this game usually needs two players or two teams.

How Do You Play Mickey Mouse Darts?

Playing Mickey Mouse Darts is fun and easy. To enjoy it, you simply need to understand the Mickey Mouse rules, how to keep the scores and how to run the game.

To start, you need to set up a dartboard.

Secondly, both players need to cork. That is shooting for the bullseye. The player who lands closest gets to go first.

In these segments, the darts count if they land on the triple, double, single, inner bull, and outer bull. You can score the triples, doubles, and singles in points as three, two, and one, respectively.

On the other hand, the inner bull is worth two points and the outer one is worth a single point. Alternatively, you can use their true value as in regular darts.

Beginning with closing off 20 on the board, the players alternate until they reach 12. Each player has to open their own number. This is done by simply landing the dart in that section. Once a player opens the number, they are the only ones that can score on it.

The opponent can close the number to prevent further scoring, but they won’t get any points. To get points, they need to score on their own open numbers.

To close off or own a number, each player must land three darts on either the double, triple, or single of that number. In each turn, a player gets to throw three darts. Before you close off a number, you can rack up points with every dart that lands in this area.

How to Win at Mickey Mouse

The beauty of this game is that the darts count toward closing off the number, even if they hit the target during different rounds. The game ends when one player closes out all their numbers first.

Therefore, to win, you need to use these three strategies in your favor:

What Is the Best Game Plan for Mickey Mouse?

If you get to go first, you have the advantage of creating a big score gap from the beginning. However, if you aren’t careful, your opponent may still gain on you and end up winning. Don’t lose focus or become overconfident.

Instead of concentrating on closing off your opponent’s numbers, keep your mind on your numbers. Don’t attempt to close your opponents’ numbers until you are at least three darts ahead. This way, even if you fail to close, you won’t be behind in points.

In addition, to be a great player, you should work on your aim. Keeping your breathing in mind and relaxing your stance can help you land more accurate darts.

In the traditional set-up of the game, the bullseye is usually attempted last. However, closing it earlier can put you ahead as it is critical to winning.

Therefore, the best time to take a shot at the bullseye in the middle of the game would be when you have a significantly higher score. This not only gives you room for multiple attempts but also ensures that you are safe should your opponent close it before you.

What Are the Mickey Mouse Rules?

Once you understand the opening and closing off numbers, the other rules of Mickey Mouse are similar to those of regular darts.

For example, only the darts that get in touch with the dartboard and stick to it count. Therefore, a Robin Hood and darts that make contact and fall off don’t count.

The other important part is learning how to record scores in the game.

How to Record Scores as per Mickey Mouse Rules

Firstly, you need to set up a scoreboard. This is easy. All you need to do is to write down the numbers 20 to 12 in the middle in descending order. In the same column, add the bull, doubles, and triples. These are denoted by B, D, and T, respectively.

On either side, create a column for each player and note their names at the top. For each point made to close off the number, make a mark against the number. Traditionally, these marks are made on top of each other.

For the first hit, create the slash / against the number under the name of the layer. In the second hit, add another slash / to create an X. Lastly, for the third hit, circle the X. This closes off the number. Furthermore, scoring is done in other variations by using an X for each hit. Consequently. Three Xs close off the number.

In some settings, the closing off is done to numbers from 20 to 15. Therefore, numbers one to fourteen don’t count and can’t gain any points.

To test skill level, you can make it harder. In this version, darts that land on closed numbers are penalized. The player gets a point deducted and it goes to the opponent.

For a more relaxed game, you can play where you still earn points on closed numbers with darts that land on it. Thus, both a high score and closed-off numbers count toward the final score. 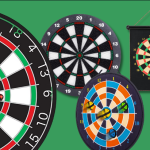 5 of the Best Safety Dartboards 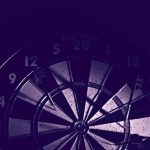