Darts FAQ is a list of questions often asked about darts. This article will answer some of the more common questions people ask when they are new to playing darts. The answers to these questions should help you get started and give you an idea of what to expect when you play darts for the first time. If you’re new to darts we suggest you learn how to play darts first.

Here are some of the most frequently asked questions:

The short answer is yes, it’s recognised as a sport in many countries. Find out more in this article.

How do you determine who throws first in a game of darts?

The process of deciding who goes first in the game will be a matter of throwing one dart. The person closest to bull’s eye gets to go first and then they go from there with 3 throws successively after which time you can grab your darts back and the next person or team takes their 3 throws.

Do you have to be tall to play darts?

No, you do not have to be tall or strong to play darts

How do you score darts?

This depends on the game you’re playing. Generally, you look where the dart landed and read the number it points to from the scoreboard. For example, if you hit a double 10 then it will show as “20” on your score board and so forth until either you or your opponent’s score reaches zero.

Is there such thing as darts tournaments?

Yes, in most bars or pubs that have dart boards you will often find dart tournaments. These are usually informal and free to enter. Most pubs will also have leagues that you can sign up for.

Is darts a good way to meet people?

Yes, it is a great way to meet other like-minded people and make new friends! Many people start off playing darts by joining their local pub’s dart league and often you will find other players to be very sociable and friendly.

How old should a child be before they can play darts?

8 years or older would be the best age for children to start playing darts. Younger children may struggle with the size of the board and darts as well as throwing accuracy, depending on their developmental stage. Check out these dartboards that are great for children.

Do you need to have good eyes to play darts?

No, you don’t need to have good eyes to play darts. You just need to be able to see the dartboard clearly and that’s about it.

Do darts players spin the darts?

Spinning the darts is done by some players but it isn’t something everyone does. You shouldn’t try to add spin to a dart-throwing technique.

How long does it take to learn how to play darts?

It can take anywhere from a few minutes to an hour or two for someone new to get the hang of throwing the darts. Everyone learns at their own pace so you’ll just need to practice more if you feel like you don’t have it down yet.

What darts are best for beginners?

The dart type you choose is a matter of personal preference. If you are just starting out the best option would be to go with would be something simple and affordable.

How did I know what weight of darts I need?

The weight of the dart is a matter of personal preference, but any darts that are within or close to 18 grams would be a decent choice for most players.

How far from the dartboard should I stand?

You should stand  7 feet, 9 and ¼ inches (or 2.37 meters) away from the surface of the dartboard. Find out more about setting up your dartboard.

How high should a dartboard be?

A dartboard should be hung at a height 5 feet 8 inches from the ground.

What does SCORE TO PAR mean when playing darts?

This is related to GOLF, a game you can play with darts and a dartboard. The aim of the game is to make your way around the board, Round-the-clock style. You score like in golf!

Aluminum tipped darts are the most popular choice for casual dart players while steel tip darts are more often used by serious dart players at tournaments.

Can You Play Darts Against Robots and Computers?

What are dartboards made of?

A dartboard is made up of four parts- the wire, the numbers, the segments and the spider. The board itself if made from sisal fibres tightly woven together to create the surface. The spider is made from strong wire that holds it in place and keeps it round. The numbers are cut out of thin metal sheets and stuck to the board, while the segments are cut out of the same material but created in a circular shape.

Can you take darts on a plane?

Yes, you can take darts on a plane as long as it’s in your check-in baggage and is properly packaged. This means that the tips need to be covered or made safe so that they don’t hurt anybody if your bag gets mishandled.

Can darts be sharpened?

Yes, darts can be sharpened to make them last longer.

Has darts ever been an Olympic sport?

No, darts has not been an Olympic sport. A version called Dartchery was included in the Paraolympics between 1972 and 1980

What does Oche mean?

Yes, but this is not advised as dart players are expected to be fully aware of what they are doing at all times. 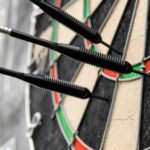 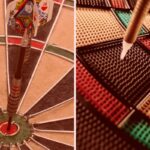