Are you Allowed to Lean Over the Line (The Oche) in Darts?

Darts, like most sports, has a set of rules that must be followed. Failure to follow dart rules during a tournament can result in penalties or the forfeiture of a match. These high-profile events have a lot on the line, so it’s crucial to always stay up to date on the dos and don’ts of darts.

The most common dart rule is the oche, also known as the throw or toe line, which you must stand behind when throwing darts. You may have noticed most professional dart players lean over the line while throwing darts.

In this article, we’ll look at whether leaning over the oche is allowed, whether it gives you a competitive advantage, and much more. Read on. 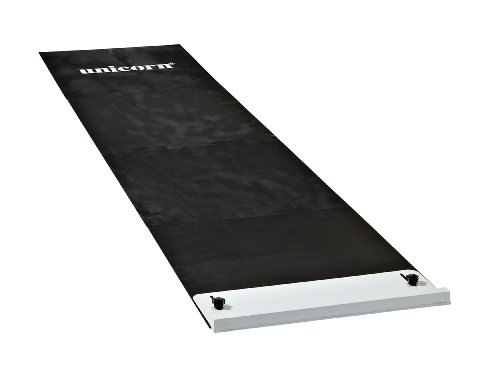 Can You Step on the Line (the Oche)?

Whether or not you can step on the throw line depends on the type of oche you’re using. Throw lines can have varying widths and heights.

When throwing darts, you’re not allowed to step on any section of a raised oche. Instead, players must always stand behind the raised oche. Most players use the tactic of pressing their foot against the raised platform. This way, you’ll have the right balance and won’t trip over the oche.

You may step on the throw line of a non-raised oche, whether it’s a tape or visible marking. However, your feet should not go past the front edge of the throw line. This disparity can cause problems if the oche is of the thin laser variety. In this case, it’s best to always stand behind the oche to avoid any disagreements.

Are you Allowed to Lean Over the Line in Darts?

When throwing a dart, the players’ feet must always be behind the oche. This means that the throw line only marks your standing position and not your release point.

The only ‘release’ rule for the oche is that players’ feet must never go past the oche’s front edge. It says nothing about the upper body.

So, while playing darts, you’re allowed to lean over the line as long as your feet do not go past the oche.

Should you Lean When Throwing Darts?

Since it’s allowed to lean over the oche, you may wonder if leaning when throwing darts gives you a competitive edge. It’s hard to say whether leaning over the line improves accuracy.

When throwing darts, professional dart players frequently lean over the line. And so, if every player appears to be doing it, does this give you an advantage in darts? No, not quite. It’s possible to lean too far over the line, affecting your balance and, as a result, the accuracy of your throw.

The key here is to find the right stance between maintaining a solid base and maintaining stability or balance.

You may have noticed that a good number of the best dart players are overweight. Some experts argue that these players have a more solid balance and often make perfect throws by simply moving their forearm and wrist.

Since there is no rule preventing you from leaning forward when throwing darts, we suggest trying it out before a competition to see what works best for you. The key is to find a leaning stance that allows you to maintain your balance and stability.

You may even discover that leaning forward is ineffective. Either way, you’ll feel more confident in making accurate dart shots once you’ve discovered what stance works for you.

Do Tall People Have an Advantage in Darts?

Another question that often pops up is whether tall people have an advantage in darts because their arms are typically longer and may allow them to lean forward much closer to the dartboard.

Being tall may have an unfair advantage for easier play. However, there isn’t much being done in standard practice to implement a rule that says how far you can lean over.

A few leagues and competitions have taken the step of having everyone throw darts without leaning over the line. However, this rule is nowhere near being applied in standard practice.

Leaning Over the Line: Unfair Advantage?

Given that leaning over the line is allowed in darts, it’s natural to wonder if this gives some players an unfair advantage.

It’s definitely worth a shot to practice leaning forward. However, not every strategy you see other players use will always work for you. At the very least, try practicing leaning over the oche before a tournament to see if you can make accurate throws that way.

Overall, because there is no rule against it, leaning forward during practice is certainly worth a try. However, it could be a deceptive advantage because the few inches gained by leaning over could cost you much more if you lose your balance during a throw.

Can you step on the line in darts: 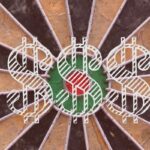 Is Darts Expensive? – Full Cost Breakdown of Everything you Need to Get Started

Rotating Your Dartboard – Everything You Need to Know 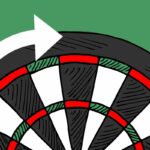